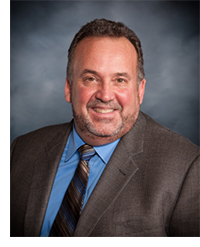 Dallas—Rod Petrick, president of Ridgeworth Roofing Co. Inc., Frankfort, Ill., has been elected the next chairman of the board for the National Roofing Contractors Association. Petrick was elected during NRCA's 133rd Annual Convention held Feb. 2-6 in Dallas and will serve during the 2020-21 fiscal year.

"It takes a lot of volunteer service to the roofing industry to ultimately become the NRCA chairman of the board," says Reid Ribble, NRCA's CEO. "Service, dedication, hard work and a team-building attitude define Rod Petrick in his efforts to make NRCA and the broader roofing industry a better place for all of us. We welcome Rod as he leads us into the future!"

Petrick previously served as NRCA's chairman of the board-elect from 2019-20, an NRCA vice president from 2014-16 and a vice chairman from 2018-19. He also served on many NRCA committees, including the Future Executives Institute Committee, Insurance Board of Governors, Manual Update Committee, NRCA University Operations Committee, ProCertification™ Committee, and Safety Regulatory and Compliance Task Force. Additionally, Petrick has served as chairman of the Technical Operations Committee, director of the National Roofing Legal Resource Center and president of the Roofing Alliance.

In addition, Petrick has served as president of the Chicago Roofing Contractors Association. He also has been a past director, officer and chairman of the CRCA Industry Affairs and Technical Operations Committee. Petrick worked with CRCA and the City of Chicago from 2001-08 negotiating the current Chicago Energy Code.

Petrick also was president of the Midwest Roofing Contractors Association. He served as a director, officer, technical committee member and MRCA Foundation chairman, as well as on the NRCA/MRCA CERTA Task Force from 2007-10.

Petrick has been in the roofing industry since 1975.

Petrick will begin his one-year term as the highest-ranking officer of one of the oldest construction trade associations in the U.S. June 1.

Since 1886, the National Roofing Contractors Association has been the home for generations of entrepreneurial craftsmen and enterprises who shelter and protect America's families and businesses and each other. Our vision is the recognition of our members as professionals and to unite the industry to that purpose. NRCA is one of the construction industry's most respected trade associations and the voice of roofing professionals and leading authority in the roofing industry for information, education, technology and advocacy. It represents all segments of the roofing industry, including contractors; manufacturers; distributors; architects; consultants; engineers; building owners; and city, state and government agencies. For information about NRCA and its services and offerings, visit www.nrca.net.