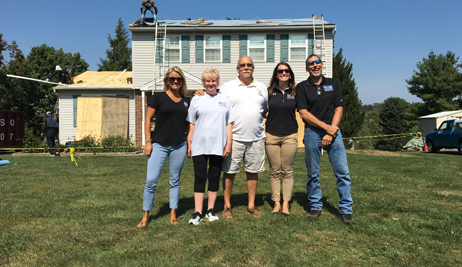 Harleysville, Pa., resident and retired Army sergeant David Gardner was selected as the winner of the Memorial Day Giveaway and received a new roof system from Rutter Roofing on Sept. 11. Gardner was unknowingly entered into the giveaway by his son, Dave, who saw it posted on the company’s Facebook page.

“I was totally shocked,” Gardner said. “When Rutter Roofing called and told me I had won a new roof, I actually dropped my phone and broke it. When I picked up my new phone and returned the call, all I could say was, ‘You’re kidding?’”

As a young man, Gardner volunteered for the U.S. Army and served during the Vietnam War, where he rose to the rank of platoon sergeant in the Fourth Infantry Division. Because of his good instincts and awareness, Gardner often “walked point” for short- and long-range reconnaissance missions. He also helped lead teams tasked with eliminating enemy patrols. After the war, Gardner built a career with the Ellis Coffee Company of Philadelphia and now is retired.

Jackie Blinebury, director of business development at Rutter Roofing, said the company created the giveaway as part of its Community/Service/Leadership pledge, which focuses on charitable giving efforts each fiscal quarter. According to Blinebury, Gardner was the perfect candidate to receive a new roof because his current roof is more than two decades old.

“A roof is perhaps the most crucial component of keeping your home and belongings safe, but it’s also a major investment that many people put off due to the cost,” Blinebury said. “This was a great opportunity for us to help someone who fought to protect our nation, and it makes all of us here feel proud to say we work for Rutter Roofing.”

“Any donation is always a good thing, but this was perfect because we had just finished discussing repairs to the house that need to be done,” Gardner said. “Their representatives presented to us in person at our front door with their smiles. Rutter Roofing has given my wife and I a wonderful gift.”