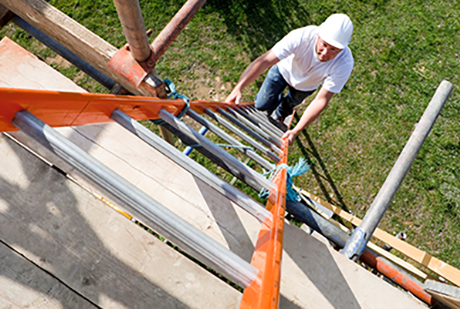 Falls are one of the most common types of job-site injuries in the U.S., and the Centers for Disease Control and Prevention report that among U.S. construction workers, an estimated 81% of fall injuries treated in hospital emergency rooms involve a ladder, according to www.constructiondive.com.

To learn more about what constitutes a safe ladder, the National Institute for Occupational Safety and Health recently selected a University of Pittsburgh professor for a $1.8 million grant to develop safer ladder designs and explore individual risk factors for ladder falls. The work, led by Kurt Beschorner, associate professor of bioengineering at Pitt’s Swanson School of Engineering, will focus on measuring friction and its role in influencing slip and fall risks on ladders.

Beschorner said if friction is too low between the ladder rung and the shoe or boot, the foot can slip off of the ladder, leading to a fall.

“A slip happens when there is insufficient friction between the shoe surface and ladder rung, but little is known about how ladder design or an individual’s body affects slip and fall risk,” Beschorner said.

Previous work from students in Pitt’s Human Movement & Balance Laboratory found groups at increased risk of ladder falls are older adults, inexperienced climbers and people with less body strength. The new study will build on these preliminary findings and extend the lab’s previous work regarding friction between shoes and walking surfaces to ladder slipping.

Past research has shown the angle of the ladder influences the risk of slipping. Researchers also found fall risk after a simulated foot slip was higher for females than males, an effect explained by differences in upper-body strength. Beschorner said these preliminary results suggest ladder design influences fall risk, and current ladders may be inappropriately designed for certain groups of ladder users.